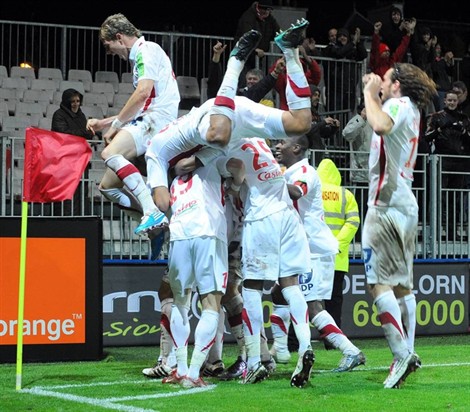 [FOOTBALL] – They may have had the torrential rain in the south of France to thank for it, but today the top spot in Ligue 1 is occupied by a name few could have predicted. A 2-0 victory over fourth place St Etienne, coupled with the cancellation of Marseilles v Rennes on Sunday due to a washout, meant that Stade Brestois 29, a team who ten years ago were floundering in the Championnat de France Amateur, the French 4th division, are two points clear at the summit. These are dizzying times at the Stade Francis-Le Blé.

“This is a great surprise,” said Brest coach Alex Dupont, who only last season led Les Ti-Zefs to promotion back to Ligue 1 for the first time since 1991, when they were relegated after filing for bankruptcy. Then followed a spectacular drop through the divisions. “The players amaze me with every match by their quality. We saw a wonderful match this evening with a second half where we gave nothing away. Our place in the standings at this time of the season can no longer be considered luck. We’re on the right track and deserved this victory.”

Deserved it they did. They’ve now gone 8 games without conceding a goal, and on Saturday even managed to keep out the league’s top-scorer in St Etienne’s Dimitri Payet. Their goalkeeper Steeve Elana is now unbeaten in 791 minutes of football, the fifth best record in the history of Ligue 1. Against St Etienne it was goals from Mario Licka and a sublime Romain Poyet chip that secured the three points and the headlines, at least for one week. END_OF_DOCUMENT_TOKEN_TO_BE_REPLACED

[DIGEST] – A small delegation of trade union CGT protestors awaits ex-presidential socialist candidate Ségolène Royal in Décines, a suburb of Lyon. In a few minutes, she will take part in a youth meeting organised jointly by the socialist party (PS) and ‘Désirs d’avenir’, her association. “Had I been elected, France would not be in the state it is today and welfare would be protected,” she begins. “In 2012, if we are elected, we will restore full retirement at 65, and the freedom to quit at 60,” she promised a little earlier at a press conference.

After the final vote on pension reform in the assembly on Wednesday, Ségolène Royal projected herself into the future, while simultaneously renewing her support for planned strikes and demonstrations on Thursday and November 6th. “We have to set a date,” she declared. “The right-wing {governing UMP} party cannot say that discussions about pensions will be reopened in 2013 and at the same time tell us to ‘Move along, nothing to see here.’ It’s totally contradictory.”

Meanwhile, Mme Royal has called for a “national pact of trust for youth employment” which she outlined in five new proposals. The first asks that companies who receive government assistance open their doors to young people under threat of financial penalties. Second, she proposes a national apprenticeship plan, and to ensure that all the apprentices find a job in their trade. END_OF_DOCUMENT_TOKEN_TO_BE_REPLACED

[DIGEST] – French police & prison officers will no longer be required to measure more than 1.6m (5ft 3in) in height. On Tuesday the Ministry of Labour repealed a number of the conditions of physical aptitude to becoming an officer.

In a decree published in its official Journal the Ministry repealed certain restrictions, notably on size and weight, for taking the entrance examination. The restrictions date back to the ‘ancien régime’, the system of governance in France between the 14th and 18th century. Back then the new recruits to the royal army had to measure at least 5 feet 3 inches in height.

Other conditions removed include suffering from a medical infection, or a neurological, physchiatric or heart-related illness. Prison officers and customs officials will also be subject to the new changes.

In addition to size, Body Mass Index (BMI) – the ratio between the weight in kilograms and height in metres squared– will no longer be taken into account when selecting candidates. They will now be examined on a case-by-case basis by a licensed physician.