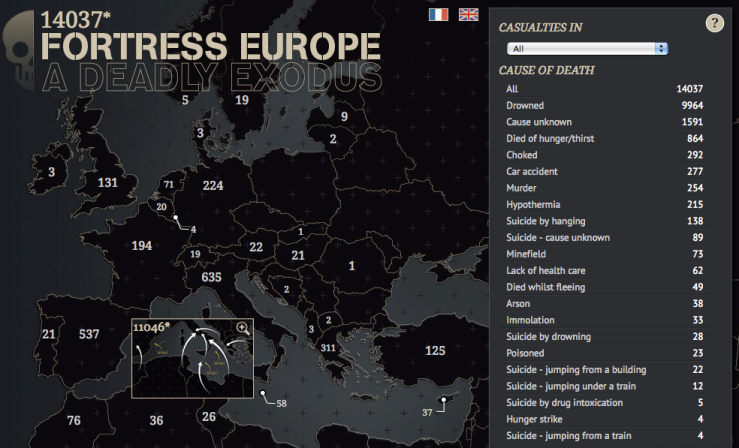 “Why count the victims of migration? Why engage in this macabre accounting, trying, in the absence of official data, to gather together the figures that NGOs struggle to collect?Because the victims of the ‘war on migrants’ are today an inseparable component of the migratory policies being practiced by Europe at its borders. And because it’s essential to make comprehensible a situation too often reduced to the notion of misfortune or made into a news item.”

OWNI’s interactive map “Fortress Europe: a deadly exodus” compiled data from the NGO United, and the results raise a number of questions. Three migration experts have already attempted to address these issues in an article entitled “Counting the dead” [FR], which was published in 2008 on a journal published by Gisti [FR], a specialist group for the rights of non-nationals.

While there are no official figures on the number of people who died trying to cross into European borders, “After NGOs started charting the phenomenon, the statistics increased during the early 1990s to the early 2000s, from a few dozen to several hundred per year.” This development is not only caused by waves of migration, but also due to increased awareness initiated by the media and groups dealing with these violations of human rights. In 1996, 459 fatalities were recorded, and 654 deaths in 2000. In 2006, United reported their were 8,855 deaths since 1993.

Since 2006, the number of deaths has declined: 1,785 in 2007, 1,430 in 2009, and only 208 in 2010. These figures give only a partial view of reality, a fact highlighted by the authors of the “Counting the dead” article. Emmanuel Blanchard, a lecturer in economics and social sciences, wrote the article with Olivier Clochard and Claire Rodier. Olivier Clochard is a geographer who designed the European border control map [FR] for Le Monde Diplomatique. Claire Rodier is lawyer at Gisti and the president of the Migreurop network, an organization “whose aim is to promote knowledge on the widespread detention of non-nationals without residency permits.”

For these three experts on the issue, “a very rough estimation suggests that this figure should be increased by two or three times, and possibly even higher.” In the case of those who drown for example, only those bodies washed ashore are recorded, not those who sank….

“In 2006 alone, during which 600 dead bodies were recovered on the coast of the Canaries, a senior immigration official from the Spanish islands estimated that the total number of migrants who drowned between the African coast and the Canaries would be ten times higher.

The estimation is confirmed by the Director of the Mauritanian Red Cross, who compares the Mauritian-Spanish crossing to ‘a game of Russian roulette’.”

The statistic is further distorted by the fact that many fishermen working in the area around Malta, Libya, Tunisia and Sicily prefer to divert their course rather than assist the shipwrecked:

“Sometimes, dead human bodies get caught up in the nets. Generally, we’re ordered to throw them back in. What comes from the sea, we give back to the sea: so says the captain.”

Security measures: a deterrent or a deadly hazard?

The more pressure and security controls exerted by the border police, the more risks smugglers take with the lives of the migrants while they are in route. According to the three experts, maritime patrols deployed by the European agency Frontex are having very limited – if not paradoxical -success in counteracting illegal migration:

“In late August 2007, the Spanish interior minister announced that within one year they had registered a 70% decrease in people coming to the Canary Islands on cayucos (small vessels which boat people arrive from the shores of Africa).

He added that during the same period, the number of dead bodies recovered on the coast of the Canaries had increased by almost 50%.

Therefore, Maritime interception operations carried out by Frontex do not deter departures but rather increase the danger of crossings.”

By investing into the deeper issues surrounding the tragic death of migrants, it’s clear what makes the situation more pressing and makes recording the numbers of casualties critical.

“The war on migrants is as dead-ended as the attempts to attain accurate records of migrant deaths. However, there is also a moral obligation to the victims…Recording the total number of lives sacrificed on the altar of ‘migratory risk’ is another way of giving a life to these nameless dead.”

In a report [FR] published in December 2010 in Plein Droits, the same three experts return to the issue of proliferated migration control and “anti-immigration.” Since the 1990s, these systems have tried to preclude the flow of ‘undesirables,’ stressing that “since the breakup of the USSR, Yugoslavia, and Czechoslovakia, about 26,000 kilometers of borders were established in the world.”

“Our image of borders is often a barrier and border posts, or even a wall or a chain-link fence topped with barbed wire and punctuated by checkpoints. This linear representation – a throwback to the Iron Curtain that divided Europe for nearly 30 years – has not disappeared. Yet immigration is increasingly subject to administrative controls, so the borders have shifted from the national boundaries to bureaucratic immigration offices located in the cities.”

The fight against immigration: a profitable business

To better understand the ins and outs of this progression, we asked Claire Rodier a few questions.

You mention the proliferation of migration controls since the 1990s, in order to “curb the flow of undesirables.” It’s a fact that we have shifted from the notion of refugees and migrants to the concept of “illegal aliens” and “undesirables.” When was the turning point exactly, and how would you describe it?

We must go back to the signing of the Schengen Convention in 1990, the aim of which was to facilitate movement within the area of the signatory countries. This in turn strengthened Europe’s external border controls.

The principle of Schengen spread across every country in the European Union after 1999. The EU is a vast area without internal borders where European citizens (and no one else) can move freely, but in order to maintain security we must lock up our external borders.

There is an increasing acceptance of the idea that we must protect ourselves against invaders – They are migrants, terrorists (after September 11) and bogus asylum seekers.

Every European law on immigration and asylum adopted since the 2000s – it’s from this date we have “uniformed these policies,” which have become common EU policy – are based on the struggle against the “external enemy.” In some cases the enemy appears to have already penetrated Europe’s wall, see for example the treatment of the Roma people in Italy and France.

You write that the borders are becoming more technological, administrative, outsourced to the private sector, relocated to the original countries of migrants. How far do you think this trend will go in modern times?

I think the process will intensify even more as it is a profitable market, regardless of the effectiveness of the techniques utilized. Just consider for example the drastic increase in Frontex’s budget since its inception. This process is therefore influenced by interests far beyond the issue of migration.

As for the outsourcing and relocation of controls, which puts the issues at a physical distance (for example when it is Mauritian or Ukrainian officials that prevent migrants getting into Europe), it is in the context of the relationship of power between European countries and those who agree to cooperate with their migration policies – a relationship which is different in each case.

Maghreb and West Africa are at the post-colonial level and have leeway to resist the pressure (with the exception of Mali). The former Soviet bloc countries are chasing the carrot of EU membership and can be blackmailed into playing border guards. Libya is a give and take relationship. We must therefore look at the  geopolitical analysis of the relationship between the EU and its neighbours to discern the future direction of European migration policies.

You mention a process of “criminalization of immigration” which bypasses international conventions and nullifies the “right to have rights.”  What would be, in your opinion, an immigration policy that respects human rights?

For those who take the time to weigh all the elements of the debate, freedom of movement is the obvious answer. In 2009, the United Nations Development Program (UNDP) hit the nail on the head when it proposed, with figures to back it up, reform to migration policies with the view to “remove barriers” in order to open the channels of entry to migrants.

In the end, the only ones who remain resistant to this realization of the need to open the borders, who are contradicting these sensible recommendations, are the governments of industrialized nations. Since they have had a “uniform” immigration policy, Europe has progressively narrowed  to a security focused approach.

The Frontex agency reinforces the physical borders of the European Union with radar, helicopters and maritime patrols designed to repel migrants. This type of corporation is a symbol of what is preventing progression. Countries are frozen in their defensive reflexes and obsessed with the preservation of their sovereignty. Those who dictate migration policies today justify themselves by brandishing the threat of an invasion which would lead to a world without borders.

Yet, establishing freedom of movement does not imply the removal of borders. They exist, their removal is not on the agenda, and they have their function in the organisation of the world. But this function is not necessarily an obstacle, a barrier: it is not because they have borders that states are forced to close them. On the contrary: it is not realistic to have an immigration policy based on closed borders.

View all posts by joyofrepetition